Let's explore an indexing structure called Vantage Point Tree, understand it intuitively, mathematically and test time complexity of a simple implementation in python
We will start very gently, talking about search in general - feel free to skip this section

We search all the time

Search algorithms are being used daily and everywhere. You wake up, and you search for the t-shirt you feel like wearing today. Then you search for your car keys because a sapless location of your keys is not something emotionally and worth remembering. You turn on your phone and search for a cafe to have breakfast at, utilizing dozens of searches while you are searching - your file system, DNS, search engine, tracking IDs of your device, etc...

The key concept in a search problem is that you don't want to go through the whole pool of objects when looking for some subset / specific element. Such a search is called linear and is not very effective. We can measure its time-complexity with Big-O notation - capturing how many operations (decisions) we have to do in the worst case until we find what we are looking for. With a linear search, it's \(O(N)\) (number of items)

Imagine yourself looking for your keys in a backpack with just one pocket. You take an item from the backpack and ask: "is it my lost key ?" and if not, throw it away. The worst-case (that's what Big-O notation denotes) is that you have to throw away everything else until the only object remaining in the backpack is your lost keys

There are many ways how to store stuff so you can later find it. Most of the techniques work in a similar way - sort things before searching either in batch or dynamically every time we want to store an object

One (of many) ways how to do it is binary search tree. You can express some parameter of your object with a number - it can be a length of text, a height of a person, rating of a restaurant - anything you would like to search in future. Let's say the numbers are \(1,3,8,7,15,5,2\)

Let's say you want to find data about the product with id \(7\):

Let's how many comparisons we can save by searching through a pool of ... let's say of 100 items? 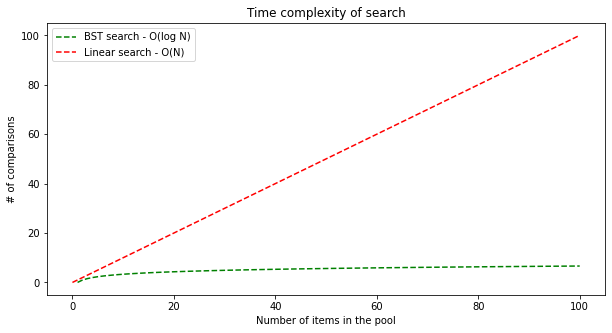 While there are many more structures, each suitable for different use-case (for example, bloom-filter can tell about (non)presence of an item in a pool with \(O(1)\) - constant complexity and sub-linear space complexity) Binary search trees and it's variants such as b+tree are very powerful as they guarantee that its time complexity is \(O(log_2(N))\), and they can perform range-scans That's the reason why these indexes are used by almost all databases for decades.

So with all these fancy structures, why do we need something else?

Let's say you have a picture of a person and you would like to find the 5 most similar faces or faces, which are similar enough, that you can assume it's the same person.
You can describe features (such as distance between eyes) with some number and find pictures of people with a similar value. You can even encode multiple features and use a compound index (still utilizing b-tree) to find similar faces

The problem arises when you have thousands of these features. A compound index will first encode the first feature, then splits leaves with the same value of the first feature based on the second feature and so on

This is something metric space can help with

In metric space, unlike vector space objects are not identified by their coordinates. Each object is identified by it's distance to other objects. By the distance we mean any metric distance function - it can be euclidean distance or even prediction of similarity from some trained model

There are the following axioms:

Some problems have asymmetric distance. For example, there might be one-way traffic if we talk about the distance between places on a map

There is an easy work-around how to turn asymetric distance to symetric one:

This essentially means "direct route is never worse than detour". It's impossible to construct a triangle if this property does not hold.

There are two kinds of searches usually done in metric space:

Again, we could naively compare the picture of a face we have taken with all the faces we have in the database, but we don't want to do it as the distance function is expensive

We need to minimize the number of times we use the distance function we have to ensure, that number of required calls for \(d\) grows slower than \(N\) (size of dataset)

Vantage Point Tree is a data structure, which can perform searches in \(O(log_2(N))\) complexity

(A bit) format definition is as follows:

So what does it mean?

We recursively divide space into smaller (n-dimensional circular areas) / "balls" each time using \(r\) which is the median of distances of undivided points to a pivot. Median means, that half of the points will have \(d(o, p) \lt r\) and half \(d(o, p) \gt r\), in another words: "It will be balanced binary tree !"

Now the most important part: Decide if we should include left or right branch

We have recently found a use-case for a search similar to this in ThreatMark, unfortunately I can't tell you more about it :)
After testing several alternatives, I find this implementation on github most readable and sane

So, ... we had some millions of some objects and trained ANN to tell how similar they are.
The script used an ugly global variable comparison_count to count the number of executions of this function

We had to deal with several issues:

Then we just tested both performance and correctness with several scripts (simplified, reducted)

And it turned out that it scales!

Metric spaces might be a good option how to search in a pool of high dimensional objects and a Vantage Point Tree is a very simple, but powerfull data structure

When thinking about using that for your project, consider at least the following:

If you read so far, I would like to thank you
If you found any issues in this post, please let me know!